Technology, equipment, methods of control and regulation of the atmosphere

Nitriding is one of the common types of chemical-thermal treatment of steels and alloys, the purpose of which is to impart increased strength characteristics to the surface layers. The nitrided layer can have a very high hardness, wear resistance, several times higher than that of hardened high-carbon and case-hardened steels. Surface nitriding allows, in addition to increasing the strength, to increase the heat resistance of refractory metals and alloys, i.e., in other words, to increase the strength of the metal at a higher temperature. Nitriding is the adsorption of nitrogen atoms by the surface of products and their further diffusion movement into the depth of the metal in order to form nitrides with alloying elements.

There are three main types of nitriding:

Note. This article discusses the issues of only low-temperature gas nitriding.

Low-temperature gas nitriding is used to increase the surface hardness, wear resistance, heat resistance, fatigue strength and corrosion resistance of mechanical engineering products. The most common parts for hardening by gas nitriding are: crankshafts, gears, plungers, aluminum extrusion dies, dies, etc. A common characteristic feature of workpieces subjected to nitriding is their difficult or impossible machining after hardening due to their high hardness and complex geometric shape. Nitriding is carried out after mechanical treatment, while heating for nitriding practically does not change the geometry of the part. With an increase in the concentration of alloying elements, the hardness of the nitrided surface increases. The maximum hardness, after nitriding, is obtained for corrosion-resistant steels and reaches 1300HV. A large depth of the diffusion layer is obtained by extended time delays in a nitriding atmosphere.

The hardness of workpieces with a nitrided layer is the total hardness of the bulk material of the workpieces due to the high hardness of carbides and surface hardening due to the formation of nitrides. To increase the wear resistance and scuff resistance, high-carbon steel grades are selected, and the parts are improved at the stage of blanks. The workpieces are hardened with high tempering, which is 20-30 ° C higher than the nitriding temperature, after which they are machined. Nitriding is the final stage in the manufacture of parts.

Note. For some parts and steel grades, it is possible to combine the tempering mode with the nitriding process.

The effect of nitriding largely depends on the preliminary heat treatment and preparatory operations. To prevent spotted hardness, before nitriding, the working surfaces of the products are degreased with solvents, and corrosion-resistant steels are etched in aqueous acid solutions to remove the oxide film. If local (local) protection against nitriding is required (the need for further machining or there are threads, etc.), you can apply protective metal coatings such as tinning, or various water-washable protective coatings such as "CERA1400", etc.

The nitriding temperature is selected depending on the chemical composition of the nitrided steel, the required surface hardness, structural rigidity and the established tolerance for the amount of deformation during nitriding. Linear deformations of products from nitriding, on average, are 20% of the size of the nitrided layer. If the size of the nitrided layer is about 0.5 mm, then the increase in the linear dimension of the workpiece will be about 0.1 mm per side. The higher the nitriding temperature, all other things being equal, the greater the layer thickness, but the lower the hardness on the surface and the greater the deformation. In a practical way, optimal modes were obtained for most parts made of various materials.

Table 1 Approximate modes of low-temperature gas nitriding obtained experimentally for technology with the use of a catalyst. 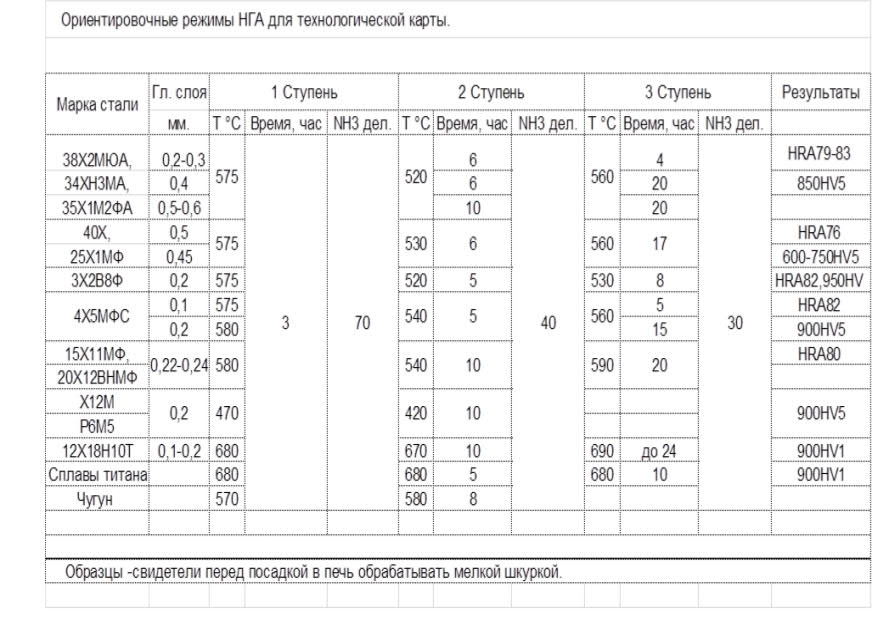 Gas flow rates in the table are indicated in conventional divisions of rotameters. Grades of rotameters, when designing furnaces, are selected in proportion to the volume of the working space.

From the experience of starting nitriding furnaces, even with the use of a catalyst or ammonia dilution technology, we recommend using a two-stage mode to reduce the duration of nitriding. In this case, the surface hardness is slightly lower than at a constant (reduced) temperature, but the time for nitriding is significantly reduced.

It is recommended to use ammonia, grade "A" in accordance with GOST 6221-90, as a basis for the saturating medium for gas nitriding. Nitrogen requirements are not regulated. 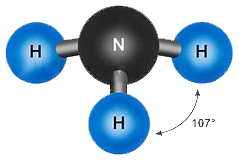 The very process of metal saturation, carried out in an ammonia atmosphere, proceeds according to the equation 2NH3 → 2N + 6H. Atomic N, which is formed as a result of this reaction, diffuses into the iron. In cases where the saturation of steel with nitrogen is performed at a temperature of less than 591 degrees, the α-phase appears first. The next phase begins to form only when the α-structure reaches the saturation limit.

In an alloy of nitrogen and iron, three main phases are observed: 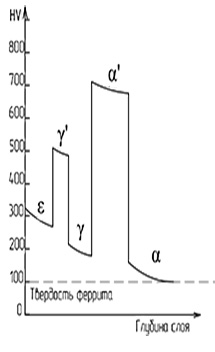 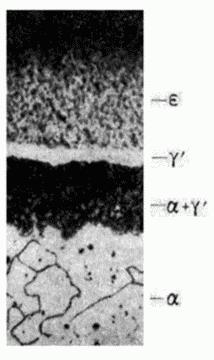 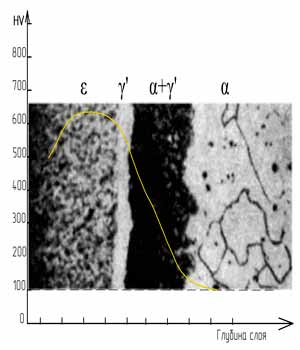 The hardness of the main phases
in the Fe-N system
Nitrided layer structure.
Grinding after etching
Hardness distribution graph over the nitrided layer

Intermediate values of nitrogen concentrations in iron are usually called α ', α' ', γ' phases. With a change in temperature, the phases are rearranged.

At a nitrogen concentration in the ε-phase at the level of 10-11%, the layer begins to embrittle and its hardness decreases. Therefore, when nitriding, it is not recommended to exceed the nitrogen potential above 10%.

Depending on the selected technology, electric nitriding furnaces are equipped with various systems that ensure the implementation of one technology or another. The purpose of these technologies is to be able to maintain the concentration of ammonia in the furnace at a certain level, regardless of the temperature of the process. The less the residual amount of ammonia in the furnace, the lower the nitrogen potential. If the ammonia in the furnace is not affected, then soon its saturating capacity will grow to 30% in terms of nitrogen potential, while a high-nitrogenous ε-phase will immediately form on the surface of the parts, which will significantly slow down the movement of nitrogen atoms into the depth of the metal. Nominally, the saturation capacity in the furnace should be maintained at a level of 6-10% nitrogen in terms of saturation capacity and is called the nitrogen potential. The concept of "nitrogen potential" reflects the processes taking place at the interface (gas-metal). Such a complete characteristic is the concentration of nitrogen in a thin surface layer of the metal upon reaching equilibrium with the gas phase. 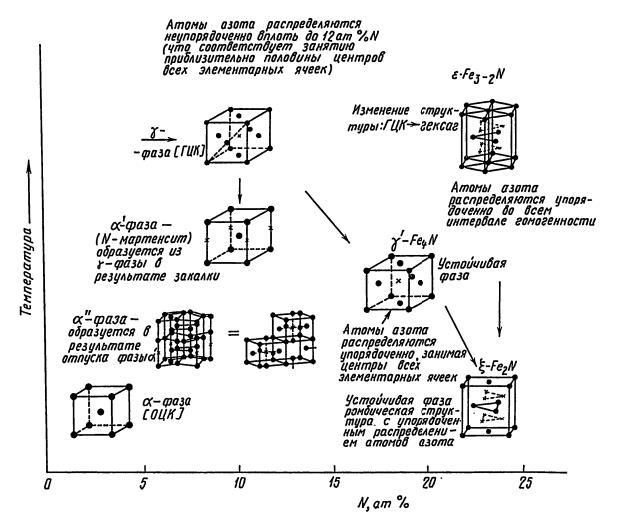 Varying the composition of the medium over a wide range allows you to change the structure and thickness of the diffusion layer, its physical and mechanical properties. Under optimal conditions, the nitride zone on the surface is minimal, and the diffusion layer consists of a nitrogenous α-solid solution.

A decrease in the partial pressure of ammonia leads to a decrease in the nitrogen potential and, accordingly, the concentration of nitrogen in the layer to the optimal value, while the rate of its diffusion into the depth of the metal increases. So with an increase in the degree of dissociation of ammonia up to 60% for structural steels, the fragility of the diffusion layer decreases due to the less development of a high-nitrogen γ ’, ε phase, a nitride phase oversaturated in nitrogen.. 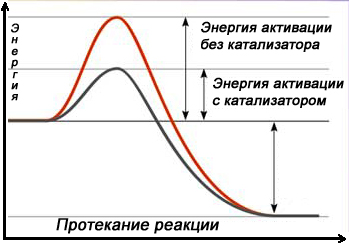 For this technology, it is envisaged to use a special catalyst of the platinum group. In this case, the catalyst is installed in the ammonia supply line, which selectively affects the dissociation processes before the gas is supplied to the furnace space. On the catalyst with ammonia, its dissociation reaction takes place to a level acceptable for nitriding.

The main controlled and regulated parameters of gas nitriding are: temperature, duration and stages of the process, gas pressure in the muffle, degree of ammonia dissociation, composition of the saturating medium, analysis of a foil sample.

Indirectly, the nitrogen potential can be determined by the degree of dissociation of ammonia with a special device: a dissociometer. The principle of operation of the device is based on the ability of ammonia to dissolve in water. The supply of gases and water to the device can be automated.

Gas nitriding is carried out in furnaces of various designs, as a rule, of periodic action. The most popular furnaces for gas nitriding are mine muffle electric furnaces, such as the USA, in which the operating maximum temperature does not exceed 700 ° C, and the furnace atmosphere is constantly renewed and circulated forcibly by a centrifugal fan. Electric nitriding furnaces can have a stationary or replaceable muffle. If the muffle is not replaceable, then a system of forced cooling of the heating chamber by supplying cold air is used. The furnaces are equipped with systems for supplying process gases, ammonia and nitrogen. Nitrogen is required to purge the muffle and displace ammonia before removing the cover. Depending on the technology chosen, the furnace gas systems can be equipped with additional lines for the furnace atmosphere diluent gases. As a rule, it is carbon dioxide, endogas, dissociated ammonia, or even air in pre-explosive volumes. Endogas is considered to be the best diluent. Regardless of the standard size and modification, all furnaces are equipped with the necessary systems for trouble-free operation. 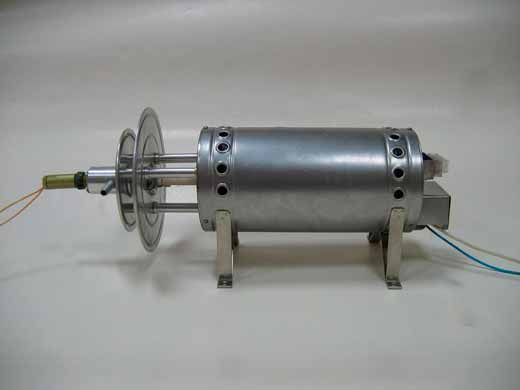 Parts of mechanisms have a certain service life, which is determined by either resistance to wear, or resistance to fatigue failure, or contact endurance. Increasing the service life of equipment is the most important competitive advantage of any manufacturer; therefore, enterprises use the most modern technologies for surface hardening. Adjustable nitriding technologies can significantly improve the strength characteristics of parts.

We will answer your questions Leave a message